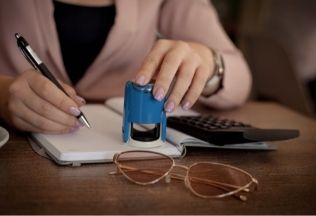 Affidavits are required for many official purposes. NRIWAY can help you get these affidavits on required indian stamp paper.

An Affidavit is a written sworn statement decided by oath or affirmation and it is used in court as proof. Depending on who is formulating the document, this can be written in the first person or third person. When an affidavit is notarized, it will include a caption with a venue and title in reference for judicial proceedings. In certain cases, a preamble is added attesting that the affiant personally appeared before the authenticating authority. Since we understand the process of preparing and implementing an Affidavit involve a lot of perfection and professionals to affidavit any statement, its better to take help of LICIT.bWe can create Name Change & Address Affidavits, Personal Affidavits, Student Affidavits, Passport Affidavits, and Gas Affidavits.

Why are affidavit services in Mumbai Filed?

Affidavits originated from the colonial notion of mistrust wherein it was considered important by the colonial British government that the nationals provide a statement in writing to ensure their word. If an affidavit by NRIWAY is being made to demonstrate our endeavor for affidavit services in Mumbai as it could be witnessed that the Government has distrust in its citizens and does not have faith in what they have to say. Further affidavits are considered to be common and they are being made in our everyday lives. It has been presumed and assumed that whatever declaration is made by a national by an affidavit, could be considered to be correct and required action could be made against.

Types of affidavits provided by NRIWAY for affidavit services in Mumbai

How to Get Affidavit services in Mumbai?

So how to make an affidavit? Each affidavit which includes the statement of facts could be divided into various paragraphs which are numbered. It would be more suitable if each of the paragraphs would be restricted to a distinctive part of the subject. Each individual, other than a defendant or plaintiff in a suit wherein the application is being made, creating an affidavit, might be stated in such a way as would serve to recognize him. This would be to state, by means of the statement of his complete name, father’s name, business or employment, and the residence address. In any affidavit when the affiant discusses any facts within his own particular understanding, the affiant should do as such directly and positively, making use of the words 'I affirm'.

At the point when a specific fact does not contain within the own understanding of the declarant, rather is stated from information secured from others, the affiant need to make use of the words 'I am informed', and, if such is the situation, need to include 'and verily consider it to be accurate' – or the affiant might specify the source from wherein he/she acquired such type of information. At the point when the statement is based on facts stated in documents, or duplicates of documents acquired from any court or any other source, the affiant could state the source from wherein they had been attained, and express his belief or information regarding the accuracy of the facts stated in such types of documents.